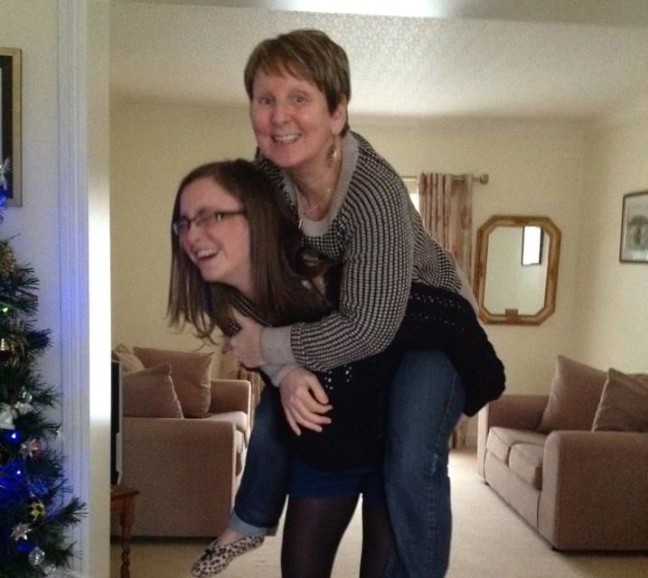 Major Dawn Parkin (ret’d) has a catalogue of miracles and events too amazing to be considered ‘coincidental’ that brought her to a place where she realised just how much God cares about her individually, and all of us corporately.

Dawn became a Christian through the encouragement of friends many years ago. But becoming a Christian does not suddenly eliminate all of life’s struggles. God promises to be with his children in times of trouble, but he does not promise to remove all of the challenges of life. Dawn was married in 1984, but by 1994 was still unable to conceive. Out alone walking her dog one day, Dawn prayed,

“Lord, please don’t leave me childless. Give me a sign that you have heard my prayer and that you will give me a child of my own.”

She turned to look at her dog, and the dog was sucking a child’s dummy! God spoke to her and said, “I’ve heard your prayer.” Three years passed, but Dawn had still not conceived. Then, in 1997, she attended a servicemen’s Mothering Sunday service.

“Halfway through the service, the children were asked to give out flowers to all the ladies. The eight year-old son of our Commanding Officer came up to me and handed me some flowers. What I didn’t expect from him was a personal prophecy – but he looked directly into my eyes and said, ‘This time next year you will have your own baby.’ A year later, to the very day, Rebecca was born!”

The little boy was spot on. It was a message direct from God.

The miracle of having a child at the age of 42 then also became God’s instrument for saving her life. Six months after Rebecca was born, Dawn’s marriage broke up when her husband left.

“On one occasion I was planning to end it all, and would have done, but God reminded me of Rebecca. He had given me my heart’s desire in this beautiful little girl, but she also gave me a reason to keep on living when I just wanted to die. God gave me Rebecca at the right time. She saved my life.”

Dawn’s military career continued as she reached the rank of Captain. Dawn doesn’t believe in coincidence, she believes in God-incidence. The commander of a camp in Wiltshire head-hunted her for a particularly important role as the senior officer in charge of welfare. It was in Wiltshire that a number of other miraculous events unfolded that would again change her life and send her in a new direction.

Shortly before Christmas 2004, Dawn started attending a church near where she lived called Oasis. It was another clear direction from God that would show her what she was to do in the future after her army career. She says,

“In August 2003, I had a strange dream about the Titanic. It was a very real dream and I couldn’t get it out of my mind. I even woke up during the dream, and when I went back to sleep it carried on again. I dreamt that I was preaching the good news about Jesus to the people on the ship, warning them that they were heading for disaster. In my dream, many people mocked, including some Christians! I woke up shaking. Two weeks later Ralph & Heather, the pastors from Oasis, came to speak at a meeting I was in, and preached my dream! I was gob-smacked!”

Dawn realised that this church had been started less than a year before by a family of five who had moved down from Yorkshire. She was immediately reminded of yet another prophecy she had been given during her time in Wrexham – ‘you will would work with a family of five.’ It all fitted together like the pieces of a jigsaw puzzle, and it set the course for Dawn’s future work in church and mission after she retired from the  army.

Dawn moved on from the army to move into Christian work in 2007. During her army career, she broke a number of records and was awarded the British Empire Medal for her contribution to military families in Germany.

‘Major miracles’ is living proof that God answers our prayers. He literally saved Dawn’s life on more than one occasion, gave her a child supernaturally, showed her where she would be living and working in the future, spoke to her and directed her through dreams, spoke to her through an 8 year old boy, and even spoke to her through the actions of her pet dog! It just shows how often God speaks and in so many different ways if we are listening.

Dawn currently lives back on ‘home turf’ in Wales, keeping constantly busy with church, missions and charity work both at home and abroad. She says,

I know God called me back to Wales but not sure how long I will stay as I want to live light and be ready to go wherever, whenever and with whoever. I serve the Lord in what He has asked of me… I feel a bit like the SAS. They are given a task, they go in and do it, and then move out awaiting other orders.

Rebecca is now grown up and studying history at university. She is a passionate Christian, just like her mother, and is even contemplating joining the British Army after she graduates.