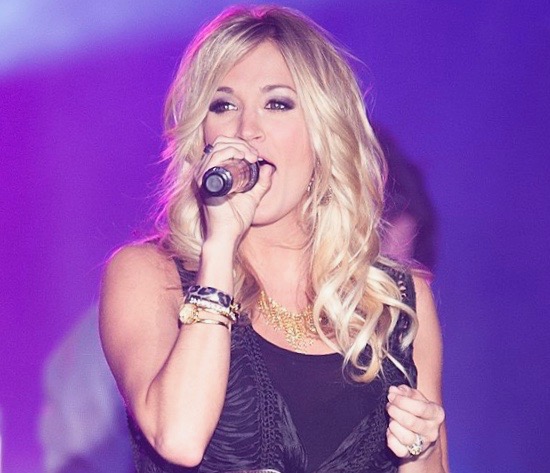 » The Stories » Carrie Underwood – More than an...

In 2005, young country singer Carrie Underwood won the popular American Idol TV series. A pretty girl with a beautiful voice, a magnetic personality and high moral standards might sound like a likely winner in an American singing contest, but at the time nobody expected the unprecedented level of success she has achieved in the years following.

From 2005 to 2018, Carrie achieved a total of 25 solo hit singles in the USA including 16 number ones, together with three more number one singles in collaborations where she is the featured artist. In addition, all five of her solo albums reached the number one slot. All of her albums achieved Platinum sales status, and all but two of her singles went either Platinum or Gold. She is one of the most successful artists in any musical genre having sold over 65 million records worldwide.

Rolling Stone magazine recognised her as “THE female vocalist of her generation of any genre”, and Billboard describes her as the reigning Queen of Country. Time Magazine listed her as one of the 100 most influential people in the world in 2014. She is also the only female country artist to have debuted at number one on the Billboard Hot 100 chart. Her list of honours includes 7 Grammy Awards, 10 Billboard Music Awards, 12 American Music Awards and a Guinness World Record.

From the beginning of her career, Carrie Underwood has unashamedly proclaimed her strong faith in Jesus Christ. At the start of her career in 2005, her second single, ‘Jesus Take the Wheel’, became her first number one hit, crossing over from country to the mainstream charts. The lyrics speak of a desperate young woman calling to God in prayer;

In addition to her music, Carrie stands out in a number of ways as a beacon of Christian faith. She believes in Christ-centred marriage. Carrie and her husband, professional hockey player Mike Fisher, have talked openly of their Christian marriage since their wedding in 2010. Carrie says,

“We both grew up in Christian families. We experienced life, and then all of a sudden we experienced fame. We are able to connect in different situations. Spiritually, we are able to be on the same page and understand each other and that was part of the connection we had. Now, it’s a big part of our marriage, for sure.”

When they are apart, Carrie and Mike read the Bible together over the telephone. They also share daily devotionals and discuss how they can live a better life for Christ.

Carrie is also an active philanthropist. She says,

“Everybody has the power to do something, to be a contributing force, and I would rather people look back on my life and say, ‘She made the world a better place.’ We can all do things like that, and I believe that when opportunities arise for you to do good, you should do good.”

In 2009 she established the Checotah Animal, Town, and School Foundation for her hometown, which helps with general causes, needs and services in the Checotah community. Through this organisation, she was able to partner with ACM Lifting Lives, supplying over a hundred thousand dollars worth of new instruments for the students. She also donated a six figure sum to Save the Children. As a keen supporter of animal rights, Carrie partnered with the Humane Society of the United States to help with public service announcements. She also opened the Happy Paws Animal Shelter in her hometown.

Carrie is not just a pretty face with an angelic voice. She is also a catalyst for good in a world looking for people to champion many causes of the needy and helpless. She is a visible example of what a real Christian should be in the often self-obsessed arena of celebrity culture.